Simply taking a slow, deep breath out in the woods in the Adirondack region of New York State is so near to a transcendent experience by itself that whenever I arrive there I feel confident in my ability to achieve an even more intense transcendent state with some effort and focus. When I was a young boy our family often visited the area in the late summer, and the appeal of the Adirondacks was very nearly mystical in my mind even then, although I clearly lacked a context within which I could describe it to myself in those terms. The sense of a divine nature to the natural setting, which I understood at the time as “being close to God,” now resonates in the same way, but with a much clearer adult context more than forty years later.

The ineffable nature of the subjective experience of consciousness, that richly-textured awareness of being, is so vividly present at such moments, that even as I experience my own personal consciousness in this extraordinary setting, I can barely contain myself to attempt to express it in words. As most people experience it, consciousness is mostly taken for granted, and contemplating its complexities and subtleties is hardly a concern, if ever. And yet, for me, the subject beckons me to explore it with such power, that whenever I am presented with the opportunity, my inclination is to spend every available moment in contemplation of its intricate nature and far-reaching implications. 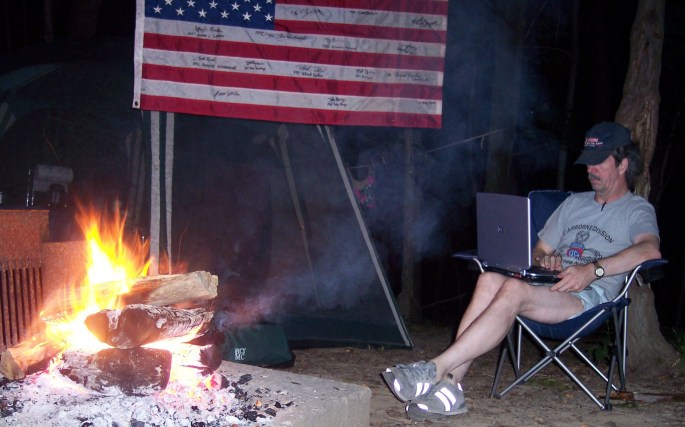 Preparing to meet with the darkness at the campsite, as the light of day slowly recedes into the gentle evening air, I sit recording my thoughts on my laptop, almost imperceptibly sliding into a comfortable degree of both melancholy and relief, deep in the burrow of the pine forest, under the canopy of what Emerson described as the “plantations of God.” Already fully prepared to begin, I set the flames of the evening campfire in motion, parked my chair agreeably close to the fire, and settled in to release whatever might escape from within me.

For me, experiencing the campfire is almost the whole point of camping in the first place. I keep thinking of my ancient ancestors from the earliest days of human awareness, filled as I am in my time, with a sense of wonder and oneness with the natural world. While gazing intently into the fire, I seem to gaze beyond the present moment, across the eons of time to share the moment with them. Surely, some of the first truly important moments of conscious awareness in humans included such moments by the fire, even if the intention was to stay warm or to gain a sense of safety from night predators.

The waves of heat seen rippling through the white-hot embers at the core of the fire, and the fluid motion of the flames lapping along the edges of the arrangement of logs, evoked for me a heightened sense of the flow of the unseen which I felt all around me, and of which we generally only become aware through moments of transcendent awareness. Surrendering to the moment, I began to view the fire as a good metaphor for temporal life. The energy that is released as the wood burns is the energy of life, and as the wood is consumed by the fire, so too does life consume the body, though as it burns, it releases the most brilliant light.

For many of us, moments of transcendence are only possible to experience fleetingly. Flashes of insight, simultaneous thoughts occurring between two or more individuals, sudden awareness of impending danger, (most often followed by an instinctual decision to meet it head on or to avoid collision with it) empathy with a complete stranger, visions, hunches, and even hopes, all hint at our connection to something much greater than ourselves that also feels essential to our nature as living, sentient beings. The more we open ourselves to these moments–deliberately placing ourselves in the path of transcendence–the closer we come to perceiving our connection to the wider world of the spirit that animates us.

During one of my most recent journeys into the deep forest, I inadvertently left one of my books out at the campsite during the day and when I returned that evening, I realized that it must have rained in my absence and suddenly my concern for the transcendent was briefly interrupted by a fairly mundane temporal concern–drying out my reading material! It’s always good to be reminded, even in the deep forest, that we are also made of flesh and blood, and exist in the physical universe!