“Both intuitive and interactive, the gnostic approach to faith is a sacred quest for greater knowledge, understanding, and wisdom—a deeper penetration of the Mystery. This path leads to a higher degree of the enlightenment experience or gnosis. The Gnostic Gospel of St. Thomas reveals how the reader can use each verse in this scripture as a source of daily contemplation and spiritual growth, while exploring…other mystical and magical teachings.”

–from the description of the text on Amazon.com

In a previous posting, I spoke of a “World Outside of Our World,” and wrote about the difficulties we face, as temporal beings, when we attempt to describe, in any comprehensive manner, those aspects of our existence which do not lend themselves easily to such descriptions. Since by the very nature of our subjective experience of the world, we have a unique view that is only possible for us as individuals to know intimately, we must acknowledge a built-in impediment to empirical verification of what it might be like to experience the world for anyone other than us.

At the same time, based on our own reactions to the experience of temporal life, it seems reasonable to allow ourselves, at least to a small degree, some leeway in considering, from the real-world responses of other sentient beings, that there are commonalities and some shared levels of experience that might be described as universal among human participants with regard to “what it’s like” to be human. It is also possible that we share much more in common with our fellow travelers in this life than we realize or can confirm with any certainty, but as a purely philosophical question, I thought it might be more useful to frame the conversation in terms of what MIGHT be possible, since scientific certainty continues to elude us currently in the 21st century.

“To love, to gain knowledge, to uplift humanity…is the purpose and meaning of this life. This name and form have meaning to the extent that (universal) consciousness is embodied. That is why the soul enters into this life, so that the being of the becoming that is within you might incarnate and the world to come might manifest. If you accomplish something of this great work, then all that you do in this life will be filled with meaning.”

Great progress is being made in the areas of neuroscience, cognitive studies, and in modern psychiatric research, regarding the roles of specific brain regions in higher cognitive functioning, associative chemical and genetic components in pathology and functionality, and a host of other related research projects that are producing new insights and expanding our understanding generally.

What concerns me greatly, as someone whose major life events have often been characterized by a variety of extraordinary moments and inscrutable experiences, is that not enough attention is being given to experiences that fall outside of our ability to explain empirically, and in the service of giving more attention to those experiences, I’ve consulted a variety of sacred texts and spiritual resources over the years, including, as quoted here, the Gnostic Gospel of St. Thomas.

While it’s completely reasonable to point out the importance of comprehending the science of the brain, reviewing the full spectrum of thought throughout the thousands of years of human history, as I have done for nearly thirty years now, suggests to me that the more speculative and intangible aspects of human experience may hold even greater significance in coming to terms with human consciousness than any number of studies of the physical brain.

Attempting to describe a “world outside of our world,”—to even call it “a world,”—requires us to acknowledge our current inability to address it in terms that are appropriate as a contrast to the physical world itself. Since we cannot participate fully in or interact directly with any non-physical realm, at least while we participate in our daily waking experience of temporal life, it can appear to the more materialistic among us that such realms fall under the category of either imagination or hallucination.

Many accounts of encounters with mysterious or otherwise temporally inexplicable phenomena often take place under an extreme circumstance like a near-death-experience, during times of great stress, or as the result of trauma. They can also occur while we suspend, in some manner, our usual routines and seek, through the practice of meditation or by an act of deliberate intention, to elicit some temporary deferment of our familiar temporal sensory experience.

“You must seek in order to discover the Spirit and Truth and must continue seeking until you realize the Spirit indwelling you and know the Truth in your own experience. It is not enough that another person has discovered the Truth. Each individual must seek and strive to discover it…”

If we are reasonably “self-aware,” we can recognize moments where our everyday experience of the senses becomes mitigated enough to approach the threshold of our inner experience of our deeper self. With regular deliberate attention, we open ourselves to acquiring glimpses of this non-corporeal aspect—experiencing moments where the two cross over—and there is an entry point between the two where we encroach upon that threshold, where the spirit which inhabits the body can shine through. As the veneer of physicality recedes, we disassociate ourselves from our physical bodies briefly. It is very difficult to sustain at first, and even with practice, we only seem to be able to persist in such a state for brief periods.

Occasionally, encounters with such mysteries and unexplained phenomena occur spontaneously, or are precipitated by unexpected circumstances over which we have no volitional input. Conversely, just because we actively seek a greater understanding as a matter of course, placing ourselves deliberately on the path toward transcendence and the spirit, we are not necessarily guaranteed an instant or satisfying result in every instance.

This interconnection and interdependence is, in my view, an essential component of our existence as both temporal and spiritual creatures. We are a multifarious conglomeration of systems and circumstances, and in view of this complexity, it seems reasonable to suggest that the whole of our complex human nature cannot be described simply in terms of our physical systems. It may be that we are still too young as a cognitive species, and haven’t had sufficient time to evolve into beings who can broadly perceive this connection—this door opening—this threshold to the world outside of our world.

It might also be true that the spirit which inhabits our bodies, which animates us, which is the vehicle for our awareness of these experiences in this life, also provides access to the world outside of ours, and since it is so difficult to articulate a comprehensive understanding of it, we view it as mysterious and can easily dismiss any potential stimulus from a non-physical source. Experiences which point to the possible existence of a spiritual or non-physical aspect to our nature are also often disregarded because we can provide no rational or empirical cause in temporal terms. 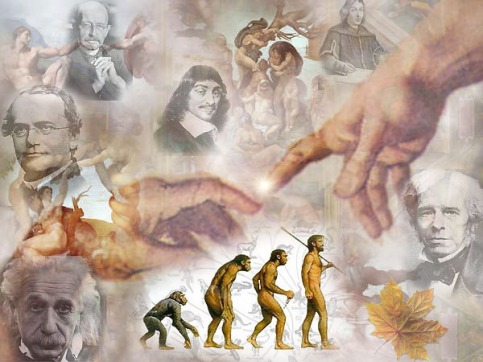 What frequently flies in the face of all such rational objections are the subjective affirmations which occur inside those of us who, without any wish to do so, endure encounters with extraordinary events. Many times, we often seem only to be able to infer possible explanations. How could such an encounter with a purely subjective embrace of a non-material world be explained other than by inference, by an informed awareness, or by some intuitive rationale? Our entire human history is replete with examples of individuals and groups making earnest attempts to do so, and eventually the subject became the purview of scholarly attentions, many of which persist to this day as potential sources of exploration for all varieties of seekers.

The quotes from the Gnostic Gospels are only one example of many which have appeared throughout human history, and there are many others which have appeared here on my blog over the last eight years or so, and even though I would not endorse any one particular viewpoint, so far, as a definitive source providing a holistic explanation for our subjective experience of human consciousness, when viewed in total, and considering the many overlapping points within each source, it seems to me that we must acknowledge, at least in the broadest sense, that all of them point to the value of exploring and being open to what may be possible.

“Everything is interconnected and interdependent; it is the nature of things ever-becoming. You must learn to accept and embrace the whole of life and the whole of yourself if you would discover the Spirit and Truth. The Light and the Darkness must be joined and you must realize the Sacred Unity.”

“When people speak about the gnostic gospels, they are almost always referring to a collection of ancient writings (in Coptic) that were discovered near the upper Nile village of Nag Hammadi, in Egypt, in 1945. These manuscripts, which scholars have dated to the fourth century, were most likely hidden in an effort to preserve them from destruction following a decree of St. Athanasius banning the use of heretical writings. An English translation of these documents has been published and can be easily referenced online.”

5 thoughts on “Interconnected and Interdependent”