As I was stirring slowly to consciousness this morning, reluctant to relinquish sleep as the light peeked through the curtains, I wandered in and out of awareness for some time, drifting between a lucid dream and my resistance to let it go. The image above which I took some years ago while on a camping trip kept appearing in my mind’s eye, and the perennial philosophical question kept playing over and over in my thoughts.

“If a tree falls in the forest and there is no one there to hear it, does it make a sound?”

The question is mostly intended to stir our thoughts to consider the inherent connection all events have in light of either the presence or absence of a conscious awareness that it has taken place. Since most events at any given time in the world escape our personal awareness, taking place when we are asleep, far distant from us, or when we are otherwise occupied, we are generally only able to be conscious of our personal environment at any given time. Recent advances in technology have made it possible to witness certain far distant events with live news coverage and satellite communications, but the event of a tree falling in the woods, when we are present, has a much different impact than when we are absent. In the photo above, I was greatly impressed by the size of the tree which had fallen in my absence, and I imagined that it must have made quite a loud noise when it fell. Even being fully aware that trees fall all the time in my absence, and that it is a natural consequence of many different variables depending on the conditions in the forest, I felt a clearly personal sense of loss, that such variables resulted in the demise of this particular living organism. As I admired the beauty of all the other trees surrounding the one that fell, it occurred to me that the other trees almost appeared to have caught the falling tree. I felt a twinge of sadness as I stood reviewing the scene, and walked around to the base of the tree, which provided a spectacular view of the bed of roots which had given way during a storm. 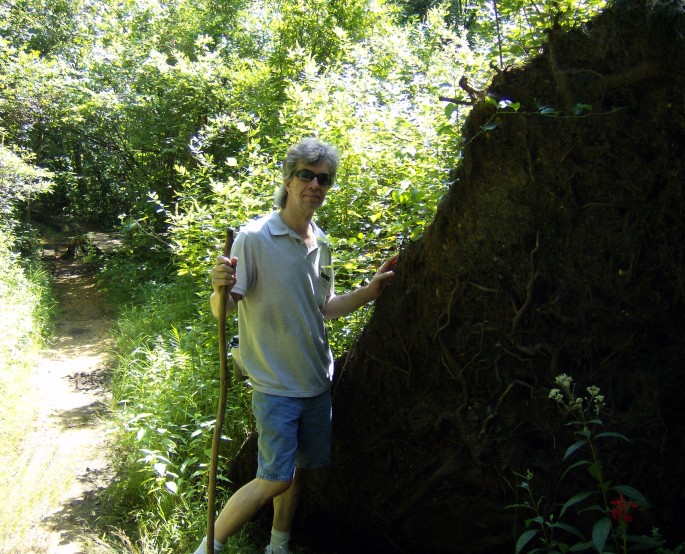 From a strictly temporal viewpoint, it seems completely reasonable to conclude that when this tree fell, there was indeed a loud crashing sound of some sort, whether or not anyone was physically present at the time. When large objects fall and come in contact with another surface or object, we observe all the time that such events are accompanied by sounds of one degree or another, and each of us can probably recall hearing some loud bang or crashing noise in the distance, which we later discover was the result of some object falling or crashing, even though we weren’t near enough to see it or to be present as it crashed. The more central issue contained in the original question, is whether our awareness of the event is necessary in order for the event to have actually occurred, or to have significance, and by inference, we are made to consider what significance there might be to ANYTHING, were there no consciously aware creatures such as ourselves to register the event and to assign some sort of value to our awareness. If no one is aware of an event, does whether or not it actually occurred make any difference in the world?

A lot depends on how you look at it! The two images of the mushroom above are the same scene from two different angles. Most mushrooms appear in a forest landscape completely unobserved in most cases, and the one above was off the beaten path, discovered a fair distance away from the trail I was following, and it seemed likely to me that I may have been the first one to be aware that it existed at all. Had I not taken that specific path, or if I hadn’t been searching for a particular image to record, it may not have been discovered ever. I took a number of images in the forest during that time, and made a number of trips into the forest in search of images for a photo essay. It seems likely that many such events take place all over the world, and that in spite of a human presence in nearly every corner of the world, many events go unnoticed and of which no one is aware, and yet, we infer that they occur from the evidence we discover at a later date. No one was around when the Milky Way galaxy was forming, nor when the earth and other planets came into being, and yet we know they are there now, and must have been long before awareness was born on our tiny little speck in the universe.

As we look further and further into the cosmos with our latest technologies, we begin to see that not only are we only a small part of a much larger galaxy, but also that there are innumerable galaxies out beyond our own, and other even larger clusters of galaxies, each of which may support some form of life, with beings who enjoy levels of awareness and creativity beyond anything we have yet been able to conjure here on Earth. There may also be no other life form with our cognitive assets, but in spite of whatever may or may not be out there, our existence is known to us, and we modern humans have been expanding our awareness, intelligence, and creativity for hundreds of thousands of years, and the existence of our ancestors provided the foundation for our existence. Our genetic inheritance as humans and as families continues to provide a foundation for our descendents, and ensures a degree of continuity in that progression. We cannot lose sight of what binds us together, and feeds the spirit of life.

I found it fascinating when the creative teams that sent the rover vehicles to Mars named one of them “Spirit,” because exploring the universe so clearly requires us to be in touch with the spirit of life, the spirit of adventure, and the human spirit, and it is an enormously creative endeavor. My belief is that what we refer to as “creative,” is, in its most essential nature, a spiritual phenomenon, and that our consciousness is a conduit through which the unmanifest becomes manifest. It is through a symbiosis of the temporal and the spiritual that such endeavors are made manifest. The desire of critics to reduce the spirit to a phenomenon that rationality can dispel or refute completely misses the mark in my view. It was once considered “irrational” to believe that the Earth was not at the center of the universe, and that “invisible entities,” like bacteria and germs were causing illness. All rational thoughts are judged to be so, relevant to the times in which they are presented, and while we may not be able to resolve issues of transcendence and spirit to the satisfaction of the materialists and skeptics, it is largely in the world of subjective experience where these issues are confronted. Our inclinations toward the spiritual as human beings may be a natural consequence of our evolutionary development. Such a predisposition, should it be established, would not eliminate the possibility of the spiritual as an essential component in any of it. The human spirit may manifest within us precisely due to our inclinations, and we may have them in order for us to be aware of the existence of the spirit.

In his now famous book, “A Brief History of Time,” Stephen Hawking wrote:

“The whole history of science has been the gradual realization that events do not happen in an arbitrary manner, but that they reflect a certain underlying order, which may or may not be divinely inspired.”