Mario Beauregard’s book makes special notice of the placebo effect in chapter six entitled, “Toward a Non-materialist Science of Mind.” In that chapter, he details the research being conducted using functional magnetic resonance imaging (fMRI) and describes what it is and why it is being employed in this kind of research:

“A magnetic resonance imaging unit is a huge cylindrical magnet that encloses a research volunteer or patient and creates a strong field. Inside the unit, radio waves affected by the field, image the small, quick changes observed in the brain while a person is actually thinking, feeling, saying, or doing something (hence it is called “functional”). Apart from its obvious value for research in neuroscience, fMRI is favored by brain surgeons preparing for an operation (individual brains differ).

“…the significant healing effect created by a sick person’s belief that a powerful remedy has been applied when the improvement cannot have been the physical result of the remedy.” 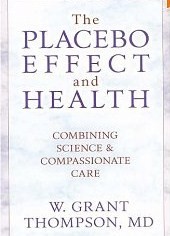 Perhaps most interestingly, he quotes W. Grant Thompson from his book, “The Placebo Effect and Health:”

“Recent functional magnetic resonance imaging (fMRI) experiments have found that the placebo analgesia is related to decreased brain activity in pain-sensitive regions of the brain known as the thalamus, insula, and anterior cingulate cortex. Pain relief was also associated with increased activity in the prefrontal cortex (where thinking occurs) during anticipation of pain, suggesting that placebos act on pain-sensitive areas of the brain to alter the painful experience.”

Beauregard notes that in view of some of the consequences of studying this and other phenomena in a variety of scientific disciplines, particularly physics:

“…physicists have been forced by the weight of evidence to move AWAY from strictly mechanical models of the universe, toward the view that the mind plays in integral role in all physical events…The reason that consciousness is a problem for materialist neuroscience is that it does not appear to have a mechanism.”

Whether or not Mario Beauregard convinces anyone of his premise in his book, I was struck by his open-minded assessment of the many varieties of human experiences that simply cannot be written off as wishful thinking or metaphorical nonsense. He insists that there is “no need to choose between science and spirituality,” and he reminds us that by working together and “understanding the relationship correctly gives us valuable neuroscientific tools for successfully treating psychological disorders…”

He also cautions that while “the study of consciousness in the twenty-first century promises to be an exciting adventure,” that it will be “stymied if the only purpose is to reduce consciousness to something it is not or to demonstrate that it is an illusion.”

My inclinations are with Dr. Beauregard…..John H.

Here is a link to Dr. Thompson’s book in which, according to the product review, “He convincingly demonstrates that patients need the best that science has to offer combined with kind and compassionate care-giving by doctors in order for a treatment to be its most effective.”