Contemplating recent comments about what it means to be a conscious human, I began to consider what really distinguishes us from all the other inhabitants of our planet. There are some distinctively human traits to be sure, but it seems more like a combination of several important capacities and foundational characteristics that sets us apart.

Most living creatures with an adequately developed brain and functional central nervous system, given sufficient stimulation in the appropriate circumstance, will generally demonstrate a fairly predictable response in their behavior, including, many times, human beings. The familiar “fight-or-flight” response when in close proximity to a dangerous carnivore would be a good example. Under most circumstances, depending on the degree of danger and the creature’s inherited abilities and previous conditioning with regard to facing such danger, if adequate motivation was present for either running away or standing up to the danger, most organisms would instinctively tend to select the behavior which provided the best option for survival. While this behavior could still ultimately result in the demise of the organism, in spite of whatever resources may be available to them, when the behavior is instinctively chosen, no judgment or further implication can be inferred.

Conversely, as cognitive creatures, with both instinctual and volitional capacities, humans can not only deliberately override instinctive tendencies, but can also consciously review the available behavioral selections, calculate the likelihood of success of any choice, contemplate previously untried alternatives, innovate extemporaneously with available resources, and even in the face of very low probabilities of success, choose behaviors which instinct alone would generally not permit. In the human brain, with all of its genetically inherited and deeply-rooted predispositions, as well as a variety of involuntary and unconscious functions, we observe mitigation of this sort by virtue of the capacities provided by our distinctly human version of the cerebral cortex, particularly from activity within the frontal lobe. The capacity to deliberately alter or mitigate our instinctive responses, and purposefully alter our environment and behaviors is a characteristic of our species, and one of the distinguishing hallmarks that separates humans from all other living creatures.

One might wish to argue that humans respond instinctively all the time, or that we tend to confer deliberate choice to our actions far more often than is actually the case, but we cannot easily disregard millions of years of evolution simply because we now have a sufficiently sophisticated cognitive capacity. We are, by most cosmic standards, a fledgling species, whose progress from being primarily impulsive creatures with a survival instinct to the more modern self-aware variety has spanned less than a hundred thousand years. Whatever degree of cognitive skill might have been adequate to qualify the earliest version of modern humans as “conscious” or “significantly self-aware,” the earliest evidence of such characteristics being demonstrated seems to fall during the Upper Paleolithic period, which saw the coexistence of the Neanderthals and Cro-Magnon.

In the waning years of survival for the Neanderthals, some evidence of expanding skills with tools has been found, and examinations of Neanderthal fossils show that the skull architecture would have supported the ability to produce language if they were able, but the available fossil evidence is not adequate to support a definitive conclusion in this regard, and there is a fair amount of speculation and disagreement as to what exactly constitutes a fully developed and meaningful vocal communication. However, the capacity and ability with language is another one of the predominant characteristics of modern Homo sapiens, and represents a significant evolutionary survival advantage. 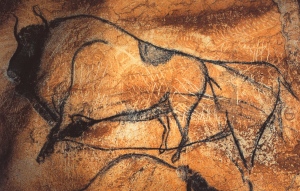 Along with the ability to communicate through language, modern humans were finally able to associate temporal objects with symbolic representations of those objects, as evidenced in the ancient cave paintings in Ardeche, France in the Caves of Chauvet-Pont-d’Arc, now believed to have been placed there some 34,000 years ago by the Aurignacian culture. However the actual progressive skills of Homo sapiens unfolded, it is clear that when it finally became possible for our ancient ancestors to make significant and meaningful use of their cognitive skills, human beings were profoundly altered, and were no longer simply another primate species struggling for survival in the ancient world.

If we begin with the idea that truly modern humans had finally achieved a significant degree of useful and discernable “consciousness” around this time, it would take another 30,000 years for the first appearance of “writing” to occur, when the Sumerians created their “cuneiform” writing system, and by definition, the beginning of “recorded history.” Everything that happened in between these two landmark developments represents a period of “blossoming” of our human consciousness, within which both language and culture flourished and expanded into what would become a global phenomenon.

Methods for communication have also been documented among other species on our planet, and we have observed a whole range of behaviors which could be described as an indication of various degrees of “consciousness,” in those life forms, including astonishing achievements in the construction of habitats, particularly tenacious species surviving unimaginable adversity, and mind-boggling evolutionary adaptations within species, over the millions of years of evolution. As amazing as they are, these accomplishments pale in comparison to what one lonely branch of primates has managed in the last 50,000 years.

Overcoming instinctive behaviors, deliberately and “consciously” choosing our path through the millennia, as disastrous as some of those choices have been and continue to be, distinguishes humans from every other known species. Whether we are able to survive and thrive in the future, could very well depend not just on our progress toward understanding human consciousness, but also on our willingness to transcend both our history and our narrow view of what might possibly explain “consciousness.”