Back in June of last year, I began my first serious reading of “Out of Our Heads,” by Alva Noë, and immediately I started to feel a high degree of admiration for his courage in addressing the philosophical, scientific, and biological approach to understanding human consciousness. His premise that “We are not our brains,” strikes at the very heart of my own notions regarding the nature of conscious awareness in the cognitively rich textures of human experience. He includes thoughts, emotions, and the fact that “the world shows up for us,” as a more comprehensive list of vital contributions responsible for our capacity for conscious experience.

He acknowledges, as do I, that the integrated activity in numerous brain regions, as well as the cooperation of our central nervous system and senses, plays a vital role in the “experience of consciousness,” but also states emphatically, as do I, that there is a great deal more required for consciousness than just a brain. He reminds us that our current technologies (PET and fMRI), while very useful as diagnostic tools, are limited in what they can actually tell us about the cognitive process.

Scans detect blood flow and average activity in a very small part of the trillions of cells within the brain, and are, at best, markers along a very wide and winding road. Most research conducted using brain scans produce averages based on multiple examinations of a variety of individuals, and may not be, in every case, as comprehensive an overview as they are sometimes presented. Wherever the blood flow is most active in the brain, those locations can be detected by these scans, and by averaging those results, we get a fairly good idea of where individuals commonly produce a response in the brain to specific stimuli. This method has been particularly useful in the highly technical realm of medical diagnosis for detecting where our doctors need to focus their attention when it comes to neural pathologies like cancer and mental illness, as well as in isolating particular brain regions for specific activities which are being studied in a variety of disciplines. 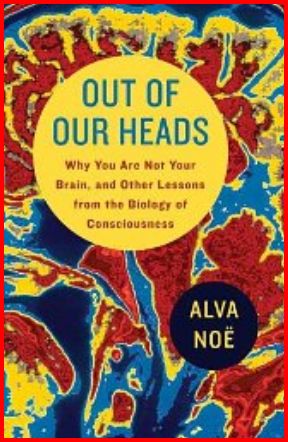 Many of the sections in the final chapters of his book emphasize Noë’s unavoidable conclusion:

“The brain is not, on its own, a source of experience or cognition…The conscious mind is not inside us; it is, it would be better to say, a kind of active attunement to the world, an achieved integration. It is the world itself, all around, that fixes the nature of conscious experience.”

If Noë’s contention is correct that consciousness consists of “Mind-Body-World,” i.e. the interaction of all three of those elements being required to connect us to our richly textured experience of conscious awareness, then many of the other widely-held ideas about cognition and neuroscience may also need to be reconsidered. Many of Noë’s arguments are relentlessly compelling for me as they affirm what I have long posited myself—to quote Noë:

“Consciousness does not happen in our brains; it is not a product of the brain. Certainly, there is no sound empirical evidence to support the idea that the brain alone is enough for consciousness.”

In a review of Noë’s book by the magazine, “Booklist,” reviewer Carl Hays sums up some of the most important aspects of Noë’s take on the current state of consciousness research:

“The notion that consciousness is confined to the brain, like software in a computer, has dominated science and philosophy for close to two centuries. Yet, according to this incisive review of contemporary neuroscience from Berkeley philosopher Nöe, the analogy is deeply flawed. In eight illuminating, mercifully jargon-free chapters, he defines what scientists really know about consciousness and makes a strong case that mind and awareness are processes that arise during a dynamic dance with the observer’s surroundings. Nöe begins with a sharp critique of scientists, such as DNA co-discoverer Francis Crick, who insist that nothing but neurons determines our daily perceptions and sense of self. He then examines studies of human and animal behavior that demonstrate an inextricable link between identity and environment. –Carl Hays”

In my view, consciousness is not simply one thing and not another. Just as the delicate neural structures within the brain may elude even f MRI scans which must “average” the locational data on blood flow readings to produce the colorful images we see in scientific literature, (individual brains differ) so too might the intricate relationships between brain regions, sensory data, the central nervous system, and the world we inhabit, escape our most determined empirical scrutiny when we turn our attention to how it all comes together.

Booklist, the magazine the New York Times calls “an acquisitions bible for public and school librarians nationwide,” is the review journal of the American Library Association. It recommends works of fiction, nonfiction, children’s books, reference books, and media to its 30,000 institutional and personal subscribers.