Hugh in his element…

We don’t often have cause to think very much about what it means to be alive and walking amongst our fellow travelers in this life from day-to-day. Most often, we rise in the morning or whenever our normal day begins, and we normally just set ourselves to the tasks which have become familiar to us as our daily routines unfold. Once in a while, though, sometimes quite unexpectedly, we are thrust into circumstances which make it much more of an immediate topic for contemplation.

Just over a week ago, on April 28th, my dear friend, Hugh, died in his sleep, apparently of heart failure, and it stunned me to think of him as no longer being alive and walking amongst those of us who cherished his friendship. There were no indications of any heart problems in the weeks prior to this unfortunate event, and during our last visit together, just a few weeks prior, we enjoyed a typically lively and animated conversation as we always did, and thankfully, before we parted, we embraced and wished each other well until our next chance to be together. The photo at the top of this posting was taken last summer during a back yard barbeque, when he fell through the fabric in the lawn chair he was sitting in. We all had a good laugh as he struggled a bit at first to get up out of it, and when I lifted my camera to capture the image of the event, he obliged me with what had become his iconic pose for just about every occasion, smiling with his hands up in the air as if to say, “oh well.”

Looking back over our many conversations over the years, it occurred to me that we actually had discussed the topic of how long we both might expect to be around in the future. As was his way, the subject generally was accompanied by some joke at the end of the conversation about the dubious assumption that he would be around much longer to worry about it. He had retired some time ago, and seemed to relish the fact that “…everyday is Saturday now.” He still had lots of stories to tell about his own working days, whenever our chats turned to the jobs we were engaged in, and we had quite a bit in common as it turned out in that way, and we both enjoyed giving the other a related story whenever the subject came up. 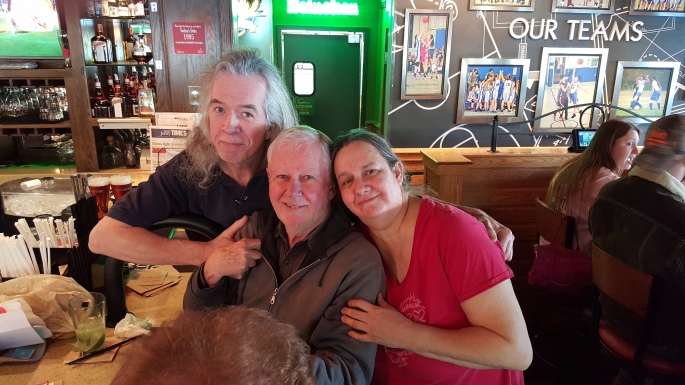 On his 73rd birthday last year, we celebrated in the usual fashion, making merry at the local Applebee’s, and on this particular occasion, rather than singing the usual awful cheer that restaurants generally give you, all of the available staff came out and sang the actual Happy Birthday song, much to his delight. He had promised them he would walk out if they did otherwise. He seemed to enjoy the attention anyway, and as many of our visits with him unfolded, there was much laughter and hugging at the end of them. As much as he said he didn’t want a fuss made over him for any reason, once in a while he seemed to really shine when we did. He was funny that way. 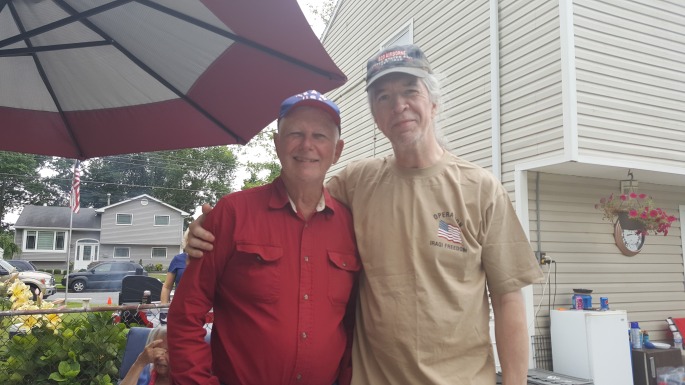 Hugh was one of the few people with whom I could carry on a lengthy conversation about philosophy or science or the state of the world, depending on the occasion, and I remember distinctly the day we started talking about my blog here on WordPress.com. He listened patiently as I described the basic premise of the writing, and even seemed intrigued as I retold the story about the circumstances which began my investigations so many years ago. Hugh was no slouch when it came to having a broad grasp of many different subjects since he did a fair amount of reading, and when it came to comprehending the world, he often had insights to offer, and never had any trouble keeping up when complex subjects came up. He always made you feel like your stories were just as interesting as his, although his were often filled with details which astonished me, especially considering that he could recall them so well. I will miss those conversations greatly.

As was his wish, there were no memorial services or typical funeral events of any sort. He had the final say on that, just as he did with a number of considerations which affected him when he walked this earth amongst us. Our memories of him and his stories now must suffice as any conversation starter in his absence, and there are many which no doubt will be heard in the years to come. We will miss him very much, but in the best way possible, his life made ours that much better while he was here, and that is tribute enough, as he would often say.

6 thoughts on “Farewell to a Dear Friend”